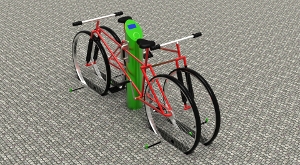 Cycling is an extremely enjoyable physical activity and a highly practical and economical means of transportation, particularly in cities. It has the potential to reduce traffic congestion, pollution and noise, whilst at the same time it can reduce our dependency on the car, improve health, reduce stress and improve the quality of life of millions of people.

Unfortunately, bikes can be an easy target to thieves...

The most important requirement for any bike lock solution is to offer strong theft-resistance. Nonetheless, additional requirements must be considered, such as freeing up the cyclist from the burden of heavy locks and chains. The design has to be truly functional that can be both easy and a pleasure to use.

After analysing the deficiencies of all known bike, it became apparent there was a need for a paradigm shift. We started questioning certain underlying assumptions and eventually the potential of a bike stand concept emerged.

What IF we could design a bike stand that is highly secure, modern and very easy to use? How could such a design blend in a city environment without compromising the aesthetic balance of the area?

Our ATLAS solution independently secures the bike's frame & wheels and is locked and unlocked using a contactless smartcard or a modern NFC-enabled smartphone.

Specifically, the concept comprises of a central stand housing (Fig. 1), which contains the necessary control electronics and two shallow pavement troughs into which the wheels are rolled. The bike frame is locked by means of a hardened shackle lock integrated on the central stand, whilst the wheels are independently secured using horizontal lock bars integrated into the troughs.

The three independent locks have an intrinsically strong resistance to the common bike thief's tools and, in combination, they create a highly secure proposition.

As a cyclist arrives to lock his bike, he places the bike in the stand and registers himself with the system by touching his phone to the stand’s NFC reader (Fig. 2). This allows the bike to be locked and, importantly, provides a one-off digital key, enabling the cyclist to later unlock the bike.

The process of locking and unlocking a bike is simple: there are no heavy, inconvenient locks for the cyclist to carry and crucially no keys to lose nor codes to forget. This is all achievable using modern cryptographic protocols and can easily be realised in an App running on a cyclist’s phone. For those without an NFC enabled mobile, a contactless smartcard will function as an alternative drop-in replacement for the NFC mobile.

The solution lends itself to integration with existing transportation infrastructure (for example, TfL's Oyster scheme). Ideally, to encourage cycling, the cost to the cyclist should be nominal. The long-term benefits to a city will far exceed the initial costs in installing & running such a scheme.

R&D CORE has developed a highly advanced, confidential version of the above concept. If you have any inquiries or want to know more, please contact us at: info@rndcore.com